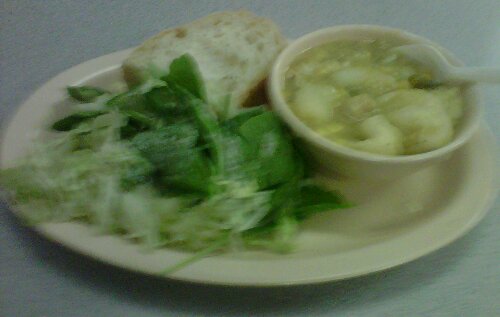 Not such a special post Christmas dinner tonite…but the potato-corn stew did have some dumplings.  Doughy not fluffy; but still not too bad.  The greens had a decent vinegerete and there was that chewy piece of bread to sop up with.  No dessert cookie this time, though…and then we heard a “Chew it long cause they’s no seconds tonite, people!!!”  Oh joy, I guess we’re back to the same-ol’ same-ol’ prison fare here…   It sure was heartbreaking seeing some of the children leaving the place on their little bikes in that biting cold, though.  And especially with not one frickin’ cookie with that meatless meal!  Y’ know, I don’t think folks mind grown men being uncomfortably hungry in the cold because they’re men…and so they wouldn’t get scared like kids would down inside.   And, since men tend to be resourceful, they can always find a better place…even if it means digging a hole…or even committing robbery and warming up in the prison hole!!  Call me old fashioned, but I just don’t like kids anywhere near prisons (which I think the Mission actually is what with all the P.O. oversite and parolees there…). Furthermore, I think there oughta be a law where children (and their moms and/or dads, of course) aren’t forced to be here and can get to be in a decent hotel with clean new rooms.  And, if it’s on Christmas, by God also a tree would have to be there with presents!!!  Christmas is for the kids…first…and then we get to be second if we’re lucky enough to watch them be happy. And it only costs a cookie or two. They laugh and smile so easy…but down to the Boise Rescue Mission it’ll just break your heart.